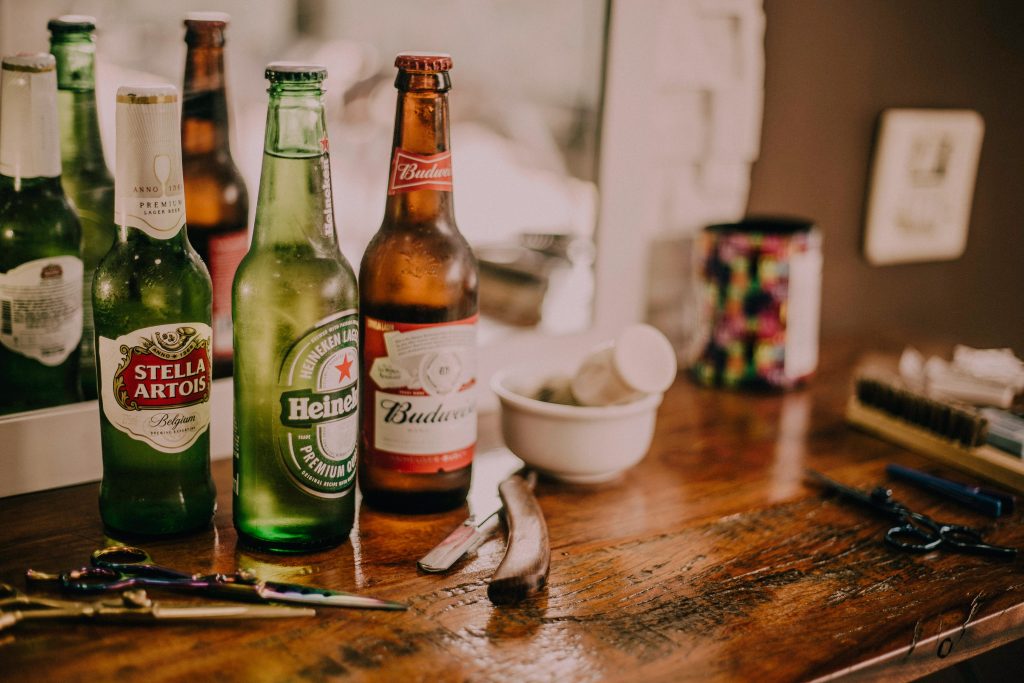 Taking certain medications while drinking alcohol can have negative and severe consequences.

While everyone’s responsibility is to check the instructions, ignoring the expert’s advice is still too easy.

This article will look at one of today’s most important concerns: mixing Alcohol with Lexapro.

If you’ve ever taken these two things together, you should stop immediately for the reasons listed below.

In this article, we will discuss why you should not consume alcohol while taking antidepressant medication like Lexapro.

Short- and long-term consequences can occur when you mix Lexapro with alcohol. Which not only reduces the drug’s effectiveness but also increases the chance of severe reactions.

If you are wondering, can I drink on Lexapro? Can I have an occasional drink while on Lexapro? Keep reading to find the answers.

Lexapro is a well-known prescription antidepressant that belongs to the Selective Serotonin Reuptake Inhibitors (SSRIs) class of drugs.

Lexapro, also known as Escitalopram or Escitalopram Oxalate, is widely used to treat anxiety, depression, Obsessive-Compulsive Disorder (OCD), and panic attacks. It has fewer side effects than earlier antidepressants and helps many individuals recover from depression.

Patients can also take it in parallel with other antidepressants to treat bipolar disorder, as per the doctor’s advice.

Low levels of serotonin, a chemical messenger in the brain that sends instructions back and forth between brain cells, may cause depression and anxiety.

SSRI medicines like Lexapro prevent serotonin from being quickly reabsorbed, allowing the neurotransmitter to connect with neurons. When neurons fire more frequently, a person feels better, has a better mood, and has more physical energy.

Escitalopram is an effective treatment for depressive disorders when taken as prescribed and used with therapy.

Lexapro comes in pill form, i.e., 5 mg, 10 mg, or 20 mg, and as a liquid solution. They are administered orally once a day. Escitalopram’s usual starting dose ranges from 10 mg to 20 mg per day, depending on the disorder being treated. This dose can be changed by the supervising physician as needed.

SSRIs require weeks to have an effect on mood; Lexapro takes one to four weeks of consistent dosing to reach full effectiveness. Patients with depression or anxiety should be patient while waiting for the drug to take action. After a month, if no substantial mental changes have appeared, the patient and their doctor should seek other treatment options.

FDA states that Lexapro is not addictive or habit-forming. However, a psychological addiction can develop if the prescription is misused and used recreationally or against a doctor’s advice.

Because Lexapro does not act quickly enough on brain chemistry to provide a high, it is unlikely to be overused or addictive. People who have abused substances or polydrugs in the past may try to abuse Escitalopram. In such cases, their body may become dependent on it, which can result in an unwanted physical reaction if they suddenly stop taking it.

As a reason, it’s preferable to begin the withdrawal process under the supervision and advice of a competent medical practitioner.

Does Lexapro Get You High

Snorting Lexapro won’t get you high because SSRIs have no recreational appeal. However, if you take too much dose, you will experience severe anxiety, panic attacks, nausea, and vomiting.

Some users feel that a large enough dose of Lexapro can create a sudden Lexapro high due to increased serotonin levels, which the FDA does not approve.

While dealing with depression and worry can be difficult, the answer to this question is, without a doubt, no.

You should not take Lexapro with alcohol because of the possibility of major adverse side effects. Even a small amount of alcohol can have a wide range of negative effects. When you take these two substances together, the symptoms of anxiety and depression may get worse.

Consuming alcohol while taking Lexapro can also cause dry mouth, nausea, insomnia, and diarrhea, among other short-term side effects of Lexapro and alcohol.

After taking Lexapro, you will feel relieved. The medicine allows you to function regularly in everyday life by preventing extreme anxiety or depression symptoms.

Drinking and Lexapro, on the other hand, lower the medication’s effectiveness, which can make your anxiety or depression worse.

Note: It’s important to keep in mind that drinking alcohol while on antidepressants might trigger adverse reactions and decrease Lexapro’s effectiveness.

Alcohol interactions with Lexapro can impair the drug’s metabolism and its effect on your body. This could have serious medical consequences.

Both drugs are sedatives, and when used together, they can boost each other’s effects. It reduces one’s ability to drive or do important tasks that put oneself or others at the risk of harm.

Once taken, a small amount of alcohol is quickly processed in the stomach. The remaining portion is absorbed into the bloodstream and the gastrointestinal tract, particularly the stomach and upper small intestine.

The liver is the primary site of alcohol metabolism, and alcohol in the blood is transported there to be broken down by ADH. Alcohol is harmful and leads to many serious outcomes when transformed to acetaldehyde or oxidized by ADH.

During Lexapro alcohol interaction, alcohol modifies the drug’s effect without altering its levels in the blood because the interaction occurs mainly in the central nervous system. Alcohol boosts the sedative effects of antidepressants.

Note: Lexapro, an SSRI, gets mixed with alcohol to improve sedative effects. It is the least important of the interactions that might occur with occasional alcohol intake.

Combining Lexapro with alcohol significantly increases the adverse effects of both substances compared to when they are taken separately.

The following side effects of Lexapro and alcohol may occur when you combine them:

Despite the fact that Lexapro is prescribed to treat anxiety and depression, combining it with alcohol can aggravate your symptoms.

When a person uses Lexapro with alcohol, he may have sudden mood swings or become aggressive. In rare cases, cognitive abilities such as response time and coordination may be affected, and breathing issues may appear.

Slurred speech, memory, and coordination are possible side effects, making driving and other daily activities more challenging. If you plan on consuming alcohol while taking Lexapro, you should see your doctor first.

It’s important to keep in mind that everyone’s body is different, and people may react to Escitalopram and alcohol in different ways. However, there have been no long-term side effects associated with taking Lexapro with alcohol. This does not rule out the risk of liver damage or other negative consequences.

Read Also: Lunesta Addiction and its side effects

Furthermore, because the patients frequently combine the prescribed drug Lexapro with alcohol, it may increase an existing alcohol use disorder or encourage more substance abuse.

Alcohol decreases the effects of the neurological system, including brain function, because it is a central nervous system (CNS) depressant. There are several risks of combining Lexapro with alcohol.

CNS depressants, such as alcohol, provide a soothing and calming effect by lowering neurotransmitter activity. It causes brain cells to communicate at a slower rate.

Because of the reduced communication speed, your cognitive and motor abilities deteriorate as you drink more.

Many people are unaware of the consequences of mixing the two substances, making this combination even more dangerous to one’s health.

When Lexapro is coupled with alcohol, mental and emotional instability might be seen, leading to more severe depression or anxiety, as well as suicidal thoughts.

Furthermore, the anger or violent behavior that this process can cause might lead to a rash or even dangerous decisions that harm oneself or others.

Antidepressants may put your liver at risk if you drink while on them. When you combine alcohol with antidepressants, the liver cannot absorb all of the toxins present. It results in deadly poisoning, according to the National Alliance on Mental Illness.

According to research, antidepressant-related liver damage has been associated with drinking while on antidepressants. It’s yet unclear how Lexapro affects the liver in particular.

Both alcohol and Lexapro increase heart rate, which can lead to life-threatening conditions such as heart failure, particularly in those with high blood pressure. It’s unknown whether Lexapro combined with alcohol causes long-term heart problems.

Symptoms of Serotonin Syndrome include:

Note: The medical emergency serotonin syndrome is a dangerous one. Those who are experiencing these symptoms should seek medical assistance as soon as possible.

It’s never a good idea to drink alcohol when taking antidepressants. Drinking alcohol while taking such medications can result in several problems, including addiction, more severe side effects, and even death.

According to healthcare professionals, people on Lexapro should limit their alcohol use because it affects both the drug and the alcohol, producing tiredness, dizziness, and gastrointestinal issues.

In rare cases, the combination of Lexapro with alcohol might cause seizures and death.

Drinking alcohol while taking an antidepressant like Lexapro is normally forbidden due to the boosted emotions it might cause, as well as the negative effects it can have on a person’s mental state and abilities.

Medical professionals have shown their concerns that even moderate drinking while taking an antidepressant-like Lexapro may lead some patients to have an intense reaction to alcohol.

If a still person insists on drinking while on the medication, they should seek consultation from their doctor. It is usually recommended to drink alcohol slowly and with meals if it is needed.

You might be wondering if Lexapro and beer are compatible. Some doctors believe that if you take an SSRI like Lexapro, you can drink moderately, which is two drinks per day for men and one drink per day for women. One drink equals 12 ounces of beer, 5 ounces of wine, or 1 ounce of strong liquor.

Note: Whether you drink on your doctor’s advice or not, you must do so responsibly and take your Lexapro as prescribed. You should never use drinking as an excuse to miss a medication dose.

Lexapro’s half-life varies between 27 and 32 hours, depending on the individual. Clearing Lexapro from your bloodstream can take up to 160 hours, or nearly six days. Because it takes five half-lives for a drug to be cleared from your system, and Lexapro has a half-life of up to 32 hours.

However, you should consult your physician before drinking alcohol after taking Lexapro, as different individuals’ bodies react differently in such scenarios.

Can I have an occasional drink while on Lexapro?

Why can’t you drink alcohol while taking Lexapro?

You should avoid Lexapro with alcohol due to the possibility of major side effects. Even a small amount of alcohol can cause a variety of problems. When you take these two substances together, the symptoms of depression and anxiety may worsen.

Can Lexapro cause sudden death?

High doses of the antidepressant Lexapro do not appear to raise the risk of sudden cardiac death compared to similar doses of other selective serotonin reuptake inhibitors (SSRIs), according to the latest research published in the Journal of Clinical Psychiatry.