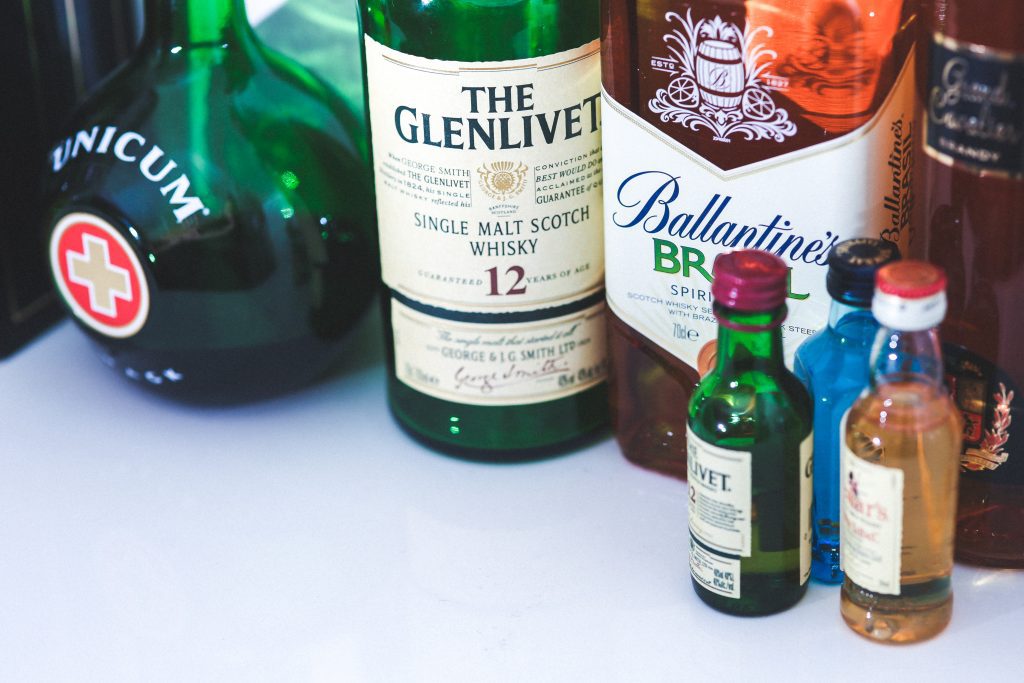 Did you know, alcohol causes approximately 3 million deaths every year around the globe? And alcohol-attributed death is very common in people aging between 20 to 39 years.

Even though alcohol is known for its toxic effects on the human body, it does have a few surprising health benefits as well.

Besides, if you consume alcohol within a healthy limit, you will not have to go through the consequences later on.

It’s not easy to control the intake, we know!

Well, if you know about the different alcohol types and their pros and cons, you might as well think before exceeding the maximum limit for alcohol consumption in a day.

Now, let’s learn about the various types of alcohol and what separates them.

We all know alcohol as a sweet drink that causes a drunken or a euphoric state for whoever consumes it.

However, there is a proper definition for alcohol accepted by WHO which states:

Alcohol is a psychoactive agent widely used in different cultures. It has addictive properties that may negatively affect one’s life.

In simple words, alcohol plays with your brain. However, its harmful effects majorly damage the liver and kidneys. And severe alcohol consumption can prove fatal as well.

Everything that you use beyond a healthy limit has its side effects, isn’t that right?

Note: According to WHO, chronic alcohol use can cause around 200 diseases and other injurious health conditions.

These diseases related to long-term alcohol consumption may affect the mental, behavioral, or physical health of a person. Moreover, it can lead to alcohol dependence – from where there is hardly any way out.

So, do you want to suffer throughout life or enjoy a wee bit each day? Think about it every time you decide to take another shot.

First of all, to learn about the basic alcohol types, you need to know the chemistry behind alcohol – literally.

In chemistry, alcohol is defined as a volatile liquid, an organic compound that has one or more hydroxyl (-OH) groups attached to a carbon atom.

Alcohol has three main types based on commercial availability:

Among these three types of alcohol, it is Ethyl alcohol (or ethanol) is widely used in alcoholic drinks. The other two types of alcohol are used for cleaning, disinfecting, in perfumes, as fuel, and for several other purposes.

Note: Methyl alcohol (methanol) and Isopropyl Alcohol (Isopropanolol) have serious toxic effects, even more than ethanol. Even a half cup or a drop (at times) of these alcohol types can prove fatal.

Guess we should just stick with drinking ethanol only!

Moving on to the different categories or types of alcohol. Almost everyone knows the names of popular alcoholic drinks but do you know the characteristics of each type of alcohol?

Guess that’s what we are here for! Let’s learn about the many categories of alcoholic beverages and their pros and cons.

Note: Any drink with more than 2% alcohol volume is considered an alcoholic beverage. But you will be shocked to know the content of alcohol in some of these alcoholic drinks.

How do you measure the concentration of alcohol in a drink anyway?

Note: ABV is the measure of alcoholic content in milliliters in 100 milliliters of solution. And alcohol proof is always twice the percentage of Alcohol By Volume.

Undistilled alcohol is more commonly known as fermented alcohol. As the name implies, this type of alcohol is made by the fermentation process.

Fermentation is a process in which bacteria or yeast act on sugar under a favorable environment to convert sugar into ethanol.

Following are the most popular undistilled alcohol beverages:

Wine belongs to the most ancient group of undistilled alcohols. But in old times, wine was the drink, fantasized by everyone but afforded by some – usually the nobles.

Wine is usually made from grapes. But some wineries also use other fruits like berries, peaches, and plums. And the most popular Japanese saké rice wine is made from starchy grain.

We all are aware of the different types of wines available globally. For example:

Each of these wines differs from the other in two ways; the type of grapes used, and the process of their fermentation.

And it is the length of contact of fermented liquid with a grape’s skin that gives each wine a characteristic color and flavor.

Note: Red wines, out of all, stay in contact longer than the other categories of wines. Hence, it takes a bright red color and a delightful flavor.

Talk about the ABV content in each of these wines, a standard wine has 12 to 15% ABV. Sparkling wine contains even less alcohol concentration, ranging between 10 to 12%.

Moreover, a fortified wine, the strongest of all, contains the distilled spirit and has approximately 20% ABV.

Beer is the most popular and oldest undistilled alcoholic beverage. It is made by fermenting cereal grains, mostly barley or wheat, in the presence of necessary enzymes.

The average range of ABV in standard beers falls between 4 to 6%. While some light beers like, lagers have 2 to 4% alcohol content, the heavier beers, like malt liquors, contain 6 to 9% alcohol.

Note: After filtering the malt produced from the grains, additional flavors or hops (aromatic herbs) are added to fill it with more flavors.

ETOH Abuse and Side Effects

Furthermore, there are two types of beers depending upon the type of grains used and whether they ferment on the top or at the bottom of the tub.

Ales and Lagers are the two most popular beers worldwide. And the alcohol content of most Ale beers is 5 to 6% compared with 4 to 5% ABV in lagers and 5 to 7% in ice beers.

Following are the different types of Ales:

The three well-known types of Lagers are:

A cider is defined as a fermented fruit juice. It contains only around 4 to 6% ABV. Hence, its light formula is usually harmless. In fact, you can swap ciders with beers, if you are not a beer-lover.

Moreover, apple and pear ciders are the most commonly consumed ciders worldwide.

However, some less commonly but greatly used ciders are; strawberry cider, blood orange cider, and ciders made from a combination of various fruits.

It’s in the name!

Distilled alcohol is prepared using the distillation method. The distillation process is one step further to fermentation that is, further concentrating the alcohol.

By definition, liquors are distilled from fermented beverages. This means that any alcoholic beverage can be fermented and distilled to produce a distilled alcohol.

Generally, all the liquors or spirits have an ABV value of 40%. Hence, these types of alcohol can cause serious health conditions which is why these alcohols are not usually placed on the bar shelves.

What is Public Intoxication?Is it A Crime?

Note: More the alcohol present in a drink, the heavier and more harmful it is. Besides,

Alcohol dependence develops very quickly before you notice it.

Now since many fermented beverages exist, there are several different types of liquor or spirits produced from these beverages. Let’s highlight them all!

Whiskey is a popular, high-end, and versatile drink. It is produced from fermented grain mash, that is, beer.

Even though whiskey is so popular yet no one knows who invented it first. That’s true and strange!

Moreover, the ABV range of whiskey is between 40 to 50%. Therefore, it’s one strong drink and also illegal in many states.

These are some famous brands of whiskey you all must have heard of:

Vodka is supposed to be tasteless, odorless, and a clear spirit. Though, some would say, it has a neutral taste but the best of best can appreciate the taste of vodka from different brands.

It is produced from fermented grains and potatoes but mostly formed from the grains. Moreover, a typical vodka in the US has an alcohol concentration of 40% ABV.

Following are some of the popular brand names producing high-end vodka:

Gin is typically vodka and has a clear color. It is made from juniper berries and on top of that, additional herbs and spices are added to make it more delightful.

Unlike other types of beverages, gin is not very soft and sweet, it is heavy with an ABV range of

Some infamous brands of Gin are:

Did you know Rum is originally a Caribbean product and was first invented on the islands of Barbados?

Rum is a distilled alcohol produced from products of sugarcane; like molasses or honey. This type of rum is called Traditional Rum.

In contrast, Agricultural Rum is made directly from sugar by fermentation and further distillation.

Moreover, many rums, known as spiced rums, are obtained by adding extra spices. All these types of rum, in general, have a 40% ABV. Whereas, a few over-proof rums have 57.5% ABV.

Note: Some rum exceeds the minimum ABV value and may contain 75% ABV with an alcohol proof of 151. Obviously, it is lethal and you should avoid consuming it.

Some popular brands of Rum are:

Some famous types of brandy include:

The famous tequila shots are now stepping up; sipped, and savored globally by consumers.

Tequila is a distilled alcoholic beverage. The main ingredient in this type of alcohol is the Mexican agave plant (blue agave) with a 40% ABV.

Moreover, many brands are coming forward to produce tequila with a characteristic taste. These are some of the popular tequila brands:

Liqueurs are known for their sweet taste and aroma. These are sweet spirits with no strict flavor or ABV requirement.

However, sometimes, added spices and herbs are used to impact more flavors in the Liqueurs with an alcohol content of 15 to 30%.

Note: Most people use Liqueurs as a before or after meal aperitif.

Several different types of Liqueurs exist based on the source of production. Out of which, Absinthe is the most popular.

Absinthe is an anise-flavored green drink made from different leaves or herbs. It contains a very high concentration of alcohol, varying between 55 to 75%.

Moreover, it may produce hallucinogenic effects, though many believe it was just a rumor.

Following are the two miscellaneous types of alcohol:

The name and availability of a cocktail are not uncommon. In fact, you will find them in every other bar placed in small bottles of cocktail bitters.

Cocktails are made from spirits, herbs, and spices. But it is not a drink itself. These cocktails are only used to add flavor to a drink.

Alcopops are famous among teenagers. These ready-to-drink beverages are a mixer of distilled alcohol with substances that dilute the drink, for instance, soda, juice, or milk.

These spirits have a very low alcohol concentration of around 4 to 7% ABV. Hence, they have the least harmful effects and can be consumed by a teenager.

We know that Ethanol has several harmful effects, damaging vital organs over time. But how can one give up on alcohol that easily?

Well, no one is telling you to stop drinking. But the take-home point is, you should stop binge-drinking to avoid alcohol addiction.

Hopefully, you now have detailed knowledge about the different types of alcohol. Each type of alcohol has its significance, be it distilled or undistilled.

Whether you like it or not, alcohol does contain harmful substances. Plus, too much alcohol intake may lead to irreversible complications and death.

What type of alcohol has the least harmful effects?

Ethyl alcohol or grain alcohol has the least toxic effects compared with methanol and isopropanol. The latter two types of alcohol are not made for drinking purposes. Hence, their intake may be lethal.

Which is the best type of alcohol?

Well, it all depends on one’s preference. You may find whiskey the best type and someone may prefer Gin over all the other types of alcohol.